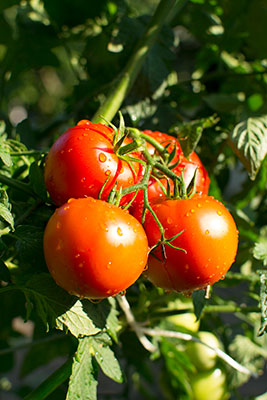 Classic summer foods include everything from ballpark hot dogs to ice cream cones, but one seasonal item not to be overlooked is the juicy garden tomato—and that season is here.

Don’t miss the chance to eat and cook with a variety of fresh tomatoes from a farm stand near you. They’re filled with health benefits and fit for feasting. Try our easy breakfast recipe, too!

The Beauty of Summer Tomatoes

In the next few editions, we’ll be featuring healthy foods that are in season this summer. This week we’re looking at the superfood powerhouse, tomatoes.
Maybe you’ve heard of the debate over whether a tomato is a fruit or a vegetable. When it comes to health and fitness, it really doesn’t matter which side of the garden you land on—this fruit/vegetable is the perfect model of cancer-fighting superfood. That’s because tomatoes contain lycopene, an antioxidant phytochemical that also helps prevent heart disease and helps ward off a number of other ailments.

But the nutrition doesn’t stop there. Not only are tomatoes a good source of vitamins A, C, and K, they are low in calories and carbs, and have no fat. Here’s an overview:

Tomatoes, like peppers and eggplants, are a member of the nightshade family of plants. Some people might be sensitive to them, and others have concluded that they might contribute to inflammation symptoms like arthritis or high blood pressure. There’s no formal study that has connected tomatoes to high inflammation levels, but still, some diet plans recommend avoiding nightshades for this reason.

For those who love them, here’s a super quick recipe that helps you start your day with near perfect egg protein and delicious, nutritious tomatoes.

Pulse tomatoes in blender until a smooth puree. Heat olive oil in a nonstick skillet on medium heat and add tomatoes and spices. Cook 7 – 8 minutes to reduce water and thicken. While cooking, beat eggs in a bowl then add to pan. Cook another 5 – 6 minutes until firm. Spoon egg mixture into the wraps and you’re ready to go!