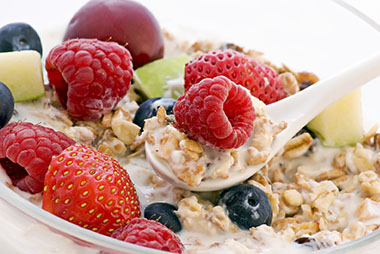 Most of us are familiar with the advice of dieticians, doctors and even our mothers, when it comes to breakfast: we’ve been told it’s good to eat a healthy morning meal.

And yet breakfast is a highly skipped meal —only 1/3 of the respondents in one study report making time to eat the first meal of the day. What benefits are they missing?

To find out, we consulted research reports from several organizations, publications and universities, including the American Journal of Clinical Nutrition, Boston University, and a major study by the University of Bath in the United Kingdom.

The root of the word breakfast—to break a fast—says a lot about its benefits to your metabolic rate. When you sleep, your metabolism slows. When you are awake, the conservation of your body systems is no longer needed. Instead it’s time to break from the fasting state and speed up your metabolism to support your day.

This is a metabolic boost that might contribute to weight management. If you’re trying to lose or maintain your weight, a healthy breakfast (not a donut and coffee!) is one way to kick your metabolism into gear. This happens through a series of reactions, including hormonal and blood sugar adjustments that correlate to several positive health indicators.

A morning meal can make a difference in your body’s ability to metabolize glucose, or blood sugar, throughout the day. You raise your glucose level in order to digest food, and to derive energy from it, every time you eat. When this happens, insulin is released by your pancreas and sent to your cells. Keeping both insulin and blood glucose levels in balance is key to good health…and this includes avoiding diabetes.

For example, one study of nearly 30,000 men found that skipping breakfast raised the risk of developing diabetes by 21 percent. Similarly, research on women under age 65 revealed that those who didn’t eat breakfast regularly were 28 percent more likely to develop diabetes than women who did.

And breakfast-skippers tend to experience larger ups and downs in their glucose levels throughout the day. Insulin sensitivity is a factor here—eating a well-rounded meal within two hours of waking may help body be 10% more effective in responding to glucose spikes for many hours, including after the lunch and dinner meals, which makes a difference in hunger and energy levels.

Prolonging your fast after your night’s sleep might trigger a greater release of “hunger hormones,” you might not have even realized you had. The hormone called ghrelin signals hunger in your body and responding to it later can lead you overeating when you finally do take in food.

Overeating has its own consequences, including the potential for weight gain. While numerous studies are inconclusive regarding a direct link to weight gain, or weight loss, and eating breakfast, research has correlated the breakfast-eating habit with healthier body weights overall. There may be other factors at play (such as health-consciousness), but it’s been shown that eating breakfast tends to be a more prominent habit of healthy people who manage their weight.

Get Your Body and Mind Moving

In one study, physical activity levels were shown to be greater among breakfast eaters versus those who did not eat in the morning. It is suggested this could be attributed to boosts of energy via the increase in blood sugar. And the increase in calories consumed throughout the day by breakfast eaters did not lead to weight gain—again, possibly related to the fact that those who ate in the morning were more active for the rest of the day.

Breakfast might also be a boon to attention, reasoning, creativity and several other mental functions. Several studies have found evidence that breakfast, for both children and adults, enhances the ability to learn, process and express information.