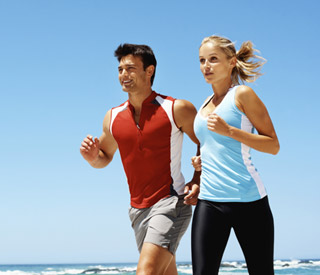 One of the major marathons on the world circuit, the Chicago (Bank of America) Marathon took place on October 12, producing expected inspiration from its top finishers.

Not all of the top ten runners to finish were shoe-ins, though. The stand out’s state of mind, along with the top American racers’, teaches us about going the distance.

The men’s winner of the Chicago Marathon, Eluid Kipchoge from Kenya, was notably more at ease when he crossed the finish line than his fellow racers behind him. In fact, some called him joyful and elegant.

Smiling, even for the last grueling miles, seemed to be both a cause and an effect of Kipchoge’s successful racing state of mind. “To enjoy the streets of Chicago, you need to smile,” he said. “With all these people, you need that big smile.”

And it paid off. It was his first major marathon victory and he achieved it with style.

This approach is also echoed by 4th place finisher Birhane Dibaba of Ethiopia. At 20 years old, Dibaba was the youngest competitor in the elite field, but her relative inexperience didn’t stop her from recognizing the powerful pleasure of aspiration.

Having run in only six marathons, her first at age 18, Dibaba’s success has surely helped fuel her happiness–she finished in the top four in every race and had won in Tokyo in June. However, her ambition is also fuel for her success as she competes and beats with the best in the world, all of whom began training and racing years before Dibaba began in 2012.

She proclaimed before the race, “Running in the Chicago marathon has been my dream since I started running… and my goal is to win…” Instead she took 4th place this time, but what makes her happy is going for her dream. We are sure to see her back again!

What can we take away from these happy thoughts, even if we don’t run a mile? Going the distance to your goals usually means feeling good about your efforts. Ever worry you might have too far to go? Try using the marathoners’ secret: enjoy the course.

In fact, top U.S. finisher for the women, Amy Hastings has the phrase “run happy” posted – like a mantra – on her Facebook page. But happy thoughts aren’t all it takes to go the distance for every runner, as she and fellow American top ten finisher, Bobby Curtis demonstrate, with a level of self-awareness we can all take notes on.

It might seem simple, but when you’re trying hard to achieve a huge goal that
is very important to you, you can lose sight of the basics. It’s best to be prepared and be in touch with what works for you.

A smart approach isn’t only about a training protocol for your body, it’s about being realistic and having a handle on decision-making along the way. As Amy Hastings learned in a recent past that includes dropping out of a Japan marathon at the halfway point with a bad head cold, slower than expected performances in 2013, and changing trainers and locations.

Hastings needed all her wits about her to tie her personal record and come in fifth place among women in Chicago. “Early on in a marathon I try to keep my emotions even, no matter what, because in the end, no one cares about early on in a marathon.”

Keeping a focused, long-range view, and knowing you can pick back up again if you fall off track, is not only a key to distance running success, but to your healthy lifestyle for the long term.

And so is knowing yourself. Being aware of your strengths and your challenges is a real gift for an elite racer, and for all of us! Bobby Curtis, 9th for the men in the Chicago marathon, shows how it’s done, when asked about going against the winners:

“…the marathon bar has been set so high. I think the stat was that Dennis Kimetto’s last half of his recent world record was a time only something like six Americans have run for a half-marathon race. So what some of these guys are doing is incredible and phenomenal but for us in Chicago…any thought of being competitive with Kipchoge or Bekele, I mean at this point, with what I’ve run, it’s just not realistic. So yeah, it is a totally separate race in my point of view.”

Curtis beat his personal best by two minutes and was the number one U.S. men’s finisher. He’s willing to run his own race for his own purposes. How about you?

When you need to go the distance, remember these winners’ smart races and happy results!