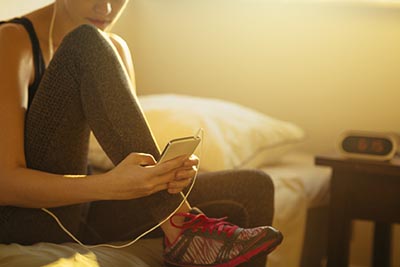 Setting our goals, planning the steps to get there, and keeping to our commitments to self – it can all be challenging for many of us. And yet we give it a try, every new year.

You can increase your odds of staying serious and on task about new habits for self-improvement by using top strategies like writing it out, saying you will and mobile apps.

When a new year rolls around, we often think about all the changes we’d like to make. We write a list of goals and pick a Resolution or two to we feel strongly about keeping.

But research suggests only about 8% of us keep our New Year resolutions. It’s nothing to be ashamed of, in fact, it’s no wonder: they tend to be rigid, and yet sweeping promises, at the same time. But science backs a few great approaches that work better.

In a study published in the British Journal of Health Psychology, researchers randomly assigned a few hundred adults to one of three groups:

Two weeks later, 38% of Groups 1 & 2 exercised at least once per week. But a whopping 91% of Group 3 exercised at least once per week. Seems like the odds are in favor of you keeping your commitments when you put what you intend to do down on paper. Writing your exact plan down could make all the difference in how you might follow through with your goal.

Write Yourself a Letter

When you resolve to be healthier (or quit sugar, work out X amount of times per week, etc.) you’re trying to make a decision on what you will commit to. But if you’re like many people, you might find it a challenge to commit when you’re a long way from the eventual results you’re working toward.

Another approach to making goals has been backed by a study done at Kellogg School of Management at Northwestern University. It’s as simple as writing a letter to your future self. In the study, two groups of students were asked to decide about what they would do after imagining themselves in the future, and then writing a letter to themselves, today.

One group imagined themselves three months in the future and the other group thought of themselves in 20 years. That second group chose to do the right thing and be true to their goals far more often than the first. Why? They saw themselves far enough in the future to imagine themselves as the person they wanted to become.

A letter to your future self can help you sustain the long-term vision that you need to stay true to your resolutions this year, and make them persist over time. There are no special guidelines. Just envision who you’ll be in 20 years and tell your future self the goals you’ve achieved to get there. Read it often…and see what happens.

Get an app to keep you accountable

The idea behind a habits or motivation app is that goal-setting becomes goal-getting when you can see visible progress with your behaviors.

You will track your habits and actions, and see your progress measured each week. With some of the apps, you can browse popular habits or create your own goals. Some offer both instant feedback and longer term “streaks” you can challenge yourself to keep going or beat.

All in all, it works so well for people to have a little reminder in their pocket always about what they said they wanted to do and if they are doing it or not. Whether you’re trying to break an old habit, take your goals to the next level, or simply make sure you’re remembering to drink enough water and go to bed early, one of these mobile tools could do the trick for you. Here are three to consider if you want to get started on 2017: