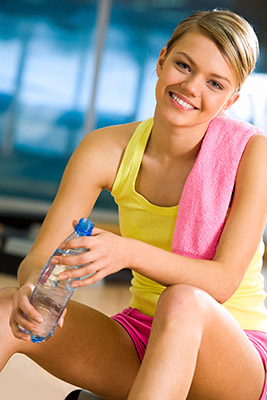 One reason so many people enjoy hitting the gym to work up a sweat is the feeling of release: we tend to think that blowing off steam and getting out frustrations is good for us.

Fitness has been connected to a healthier mindset, but the power of positive thinking has its own lifestyle influences. It appears optimistic habits create a sense of wellbeing and influence physical wellness, too!

Here are some tips for how to stay strong and healthy, inside and out, with an optimistic approach.

When you’re stressed out, you’re not well. That has been shown to be true physiologically, in medical studies that link stress hormones to everything from the unhealthy storage of visceral fat to headaches, appetite fluctuations and more.

Since the days of Sigmund Freud, it was assumed that we could let go of fixations on life’s stressors through outward expression—shouting, punching a bag, etc. It turns out, studies are now showing a much better effect from letting things go.

One group of researchers found that people who have symptoms of mild depression were actually more depressed after periods of talking or writing about their problems. Instead of feeling better, they reported their mood declined.

Another study found that venting in an assertive way, such as hitting a punching bag or plotting revenge on someone who makes you angry, also leads people to feeling worse instead of better. The best results were obtained by subjects who did nothing in response to their anger as compared to those who pursued more aggressive responses.

See the Glass as Half Full

What did you learn? How can you use your problems to your benefit moving forward? Answers like these appear to fuel not only recovery from trauma, but also to support general health.

Psychological researchers suggest there is a better approach than either lashing out to express anger, or simply doing nothing: to benefit from experiences you perceive to be negative, turn them into a positive pursuit.

Having a productive goal is a form of optimism that can lead to a healthier life in the long run. Optimism is a coping mechanism to deal with adversity, and even the toughest life events can be balanced out by a search for meaning and improvement based on hope.

This was shown in one study, which examined people’s expressions about their most traumatic challenges and their medical records for a year. Those who sought to get meaning and evolution out of the event had fewer hospital stays and doctor visits than the others.

If at first you don’t succeed, you might feel a bit defeated, or frustrated…even to the point of giving up. Pessimism leads to feelings of futility, and that kind of reaction can make for a good excuse to give up on your goals.

However, it is feelings of resilience and trust in our ability to bounce back that helps us cope with setbacks and stress. Optimism plays an important role in our levels of resilience. Positive attitudes allow for belief in a better outcome, so optimists tend to rally, and to gather their resources and strength, instead of fizzling out or feeling doomed to fail.

Allowing yourself to regroup and try again when you slip up or fall off your plan, is a key to staying with a fit and healthy lifestyle, as well as to achieving the goals you have for your own happiness!