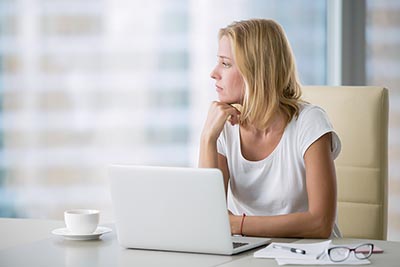 Have you ever described yourself as kind of… stuck? Maybe you feel stuck in a job, stuck on a fitness plateau, stuck in a stale relationship, or even stuck living where you live. Why is that?

Experts say the feeling of being stuck in a rut is likely to come from a deeper feeling that keeps you from making a change. Maybe you’re afraid, or uninspired. Here are a few ways to unstick!

What’s the reason for the feeling?

When you look a little deeper at why you’re feeling stuck, you’re likely to find any number of reasons that seem practical on the surface. Staying the same in a job, in your longtime habits, in your hometown, even with your same hair color… all of these choices create a feeling of safety or security. We tend to like to know what to expect, and we know others do, too.

So, getting unstuck requires a risk. Or at least, a decision to do something different. And that means you might worry about making a mistake, or you might assume that you’re better off with what you have than what might be worse if you were to change things up.

So, you don’t make a change. You put things on hold. The process of getting yourself out of a rut begins by discovering what’s really holding you back.