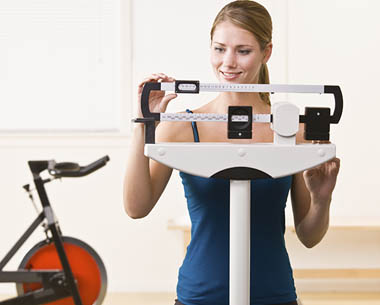 If you’re trying to lose weight, there are several approaches you might take to weighing yourself. Advice ranges from “every day” to “don’t go by the numbers on the scale.”

One recent study at Cornell University suggests that self-monitoring helps people lose weight and better sustain the loss. But should it be a daily ritual to step on the scale?

The Study of Weigh Ins

Professional trainers and weight loss coaches have varying views on the topic, as do individuals who have had success with weight loss methods. Recognizing this, the Cornell study eliminated the elements of ongoing dieting advice as well as rewards or remarks about any weight loss to participants, to focus on the effects of self-weighing and tracking alone.

What they found was that people who weighed themselves every day and charted their results on a graph, did lose more weight than the control group who did not. Over a two year period, those who weighed and tracked kept more weight off, too.

The numbers weren’t staggering though—just a few percentage points of body weight was lost, and kept off, on average. So, what does that mean for the rest of us?

The Cornell research isolated the effect of self-monitoring, without adding in the impact of a professional to encourage or tweak a personalized program over time. Every participant was given the same instructions for weight loss on day one, and half were sent off with the scale and instructions for record keeping.

The additional weight loss of the participants weighing daily suggests that it can make a positive difference in a person’s weight loss success. But there’s no way to know the real reasons. Is it personal accountability, the visual feedback, or simply the knowledge that their progress would be on display with the university researchers?

The overall takeaways are:

What About Weighing Less Often?

The bottom line: Definitely track your efforts, but do so at the frequency that best matches your personality and preferences. Your weight on the scale is only one spoke on the wheel that drives your results!